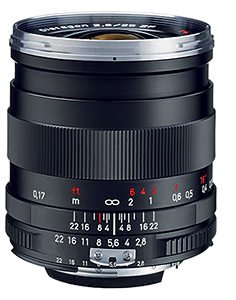 Special thanks go to Frank Fremerey who conducted this test on a Nikon D2X using a pre-production test sample number 000009 from Zeiss in Germany. Final production models may of course perform slightly differently. Further images may be downloaded here.

Despite the Cosina slurs frequently bandied about, there is every reason to believe that this has a real chance of making a splash among weak 24mm competition. Perhaps Zeiss have debuted this lens in ZF mount because Nikon’s offerings at this focal length aren’t particularly attractive: their venerable AIS workhorses are reliable but uninspiring performers in f2 and f2.8 guises.

I don’t imagine that ZF 85mm f1.4 sales have been particularly strong: Nikon 85mm f1.4 D users have been justifiably underwhelmed – even confused, insulted – at being offered a inferior manual focus equivalent to a lens whose reputation is almost without peer. Maybe Zeiss is looking for an easier fight at 24mm.

For an f2.8 lens, the ZF 25mm is a big hunk of glass, weighing in at 480g and measuring 66mm in length. However, it is an entirely new 10 element design that shares little with the earlier, somewhat unloved Contax/Yashica mount Distagon of the same focal length. A welcome development is a drastic improvement in close focusing ability: Zeiss quotes a figure of 17cm from the film plane; a hair-raising 6cm from the front element. The MTF charts make fairly impressive viewing, too . . .

Please note that the following test was conducted with an APS-sized sensor – leaving a question mark hanging over its true corner performance, which will be assessed on a full frame Canon body in a forthcoming test. Meantime, let’s see what we can learn from its performance on a Nikon body . . . at least we won’t have to worry about adaptor issues.
[nextpage title=”f2.8 and f4 Comparison”]

Spot-on wide aperture performance, this: Leica-like. How gracefully this resolution is maintained into the real corners remains to be seen . . .

Considering the ZF is giving away a whole stop, it’s impressive how it brings to the table all the traditional Zeiss attributes one stop down from wide open: microcontrast and, to a lesser extent, resolution, are clearly superior to the Nikon f2 at f4, rendering a much more ‘believable’ 3D image. Detailed tests of its wide open performance corner to corner will be the subject of another test, but there is reason to believe that the ZF’s wide aperture performance will be exceptional. Here’s a 100% crop from the extreme lower-right corner of an APS sized capture:

Apart from the exposure, which pumps more midtone information into the Nikon shot, the primary different centre frame between these centre f5.6 crops is distortion: Zeiss has clearly paid a lot of attention to geometric distortion with their new, potentially class-leading ZF. The corner crops demonstrate that chromatic aberrations are well corrected, too.

I’m not sure this ‘corner’ performance is unbeatable at this aperture: the Canon 24mm f1.4 L is exemplary at f5.6 across the frame, and the little Olympus 24mm is starting to come on song . . . however, compared with Nikon’s best at 24mm, the Zeiss ZF shines again: straight lines, no red halos and marginal resolution loss.

One or two point to note here: the ZF was tested at f9.5 against the Nikon’s f8. Either the f2 rates its apertures rather too optimistically, or perhaps the f2.8 is a little faster than it pretends to be . . . the lens certainly looks big enough to be an f2. Also note the typically cool colour rendition of the Zeiss: though the natural lighting in this series of shots varies somewhat, the Nikon f2 is consistently warmer.

Typically, both Nikon and Zeiss wide angles like to be stopped down to at least f8 to deliver their best; once again, though, the new ZF outstrips the ancient AIS lens by a significant margin.

The raw material from which this test was taken also includes comparisons of the ZF 25mm with the later (inferior) autofocus Nikon 24mm f2.8 prime and a number of other lenses, including the Sigma 20mm and Nikon 50mm. Download whole captures here. And thanks again to Frank for boldly going . . . .

As ever when viewing published tests, please check carefully the exact position of the focal plane: tiny inconsistencies so easily ruin tests like these, especially when assessing wide aperture performance.

If you’re a Nikon shooter, the conclusion is irrefutable: as soon as it hits the shelves, run and get a ZF 25mm: it will be the sharpest and best corrected 24/25mm you’ve ever seen. End of story.

If you shoot Canon, however, you may already have been spoilt by the uniquely fast f1.4 L, or the astoundingly fine (and tiny) Olympus 24mm on an EOS adaptor. You might wonder how the ZF renders those all-important corners under the scrutiny of a more demanding sensor. You might have even read the 24mm World Cup in which the Nikon 24mm f2 was assessed on a full frame camera and convincingly bettered by the fast Canon, so you’re thinking: the ZF is better than the Nikon f2 – so what? For you (and me) a conclusion would be premature.