Further to the apparent narrow victory of the Nikon AF-S 17-35mm f2.8 in the 21mm play-offs for second place to the Zeiss 21mm, the natural next step was to assess its performance against the Contax Zeiss 18mm f4 Distagon. While nowhere considered the equal of the all-conquering 21mm f2.8, the 18mm shares joint honours with the similarly well-regarded Zuiko ON Olympus 18mm for the title of the world’s best at this focal length.

I’m still struggling to come to terms with the apparent fact that the Nikon zoom is not outperformed by the stellar Olympus 21mm f2 – and ultimately – this sample at least – bests it in most areas. But I’ve also discovered the AFS’ Achilles’ Heel – nasty pincushion distortion in the 26-35mm range, and it has a reputation for being a bit barrely at the wide end, which should play to the strengths of the CZ 18mm which, like the Olympus, is generally considered to be Very Well Corrected.

Mechanically, both are exemplary, though quite different: the Nikon is a smouldering brute of a thing, all metal and engraved numerals, but the iron fist is gloved with silky-smooth operation – a uniquely smooth zoom control (I thought it was broken at first) and reassuringly swift focusing. The Zeiss is a Zeiss: absolutely no bigger than it needs to be, beautifully T* coated, and an understated aura of indestructibility about its construction – this, incidentally, was an absolutely mint MM sample on a dSLR Exchange adaptor. Some claim the German made AE versions are sharper.

I have to confess I was expecting the Nikon to do well in this test, but can’t quite shake the suspicion somehow that it’s not the giant killer it has appeared to be in earlier tests. On with the show . . .

Testing as usual was conducted with a 1Ds II, ISO 50, choice made between three focus bracketed exposures at each apertures, RAW processed through C1 and saved for web with BoxTop Pro JPEG. Modest identical USM applied to each image. 100% crops shown. Plumbing still needs fixing.

The image below is the full frame reduced to 500px wide as shot by the Zeiss 18mm. Placing your cursor over the image will cause it to rollover to show the same frame as seen by the Nikon 17-35mm at (almost!) the same focal length. 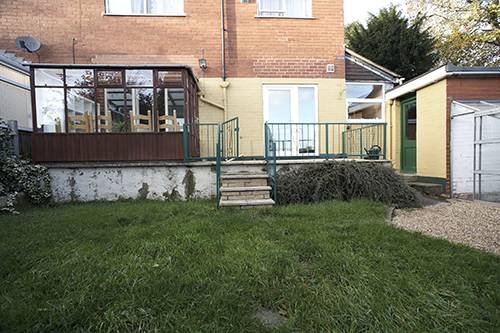 Right away I’m not impressed by the Zeiss 18mm – look at the waveform pincusion distortion… and unless my eyes deceive me, surely that’s not vignetting at f11?

Come on! That’s just not right – how on earth can this impudent zoom not just murder the CZ18 for corner sharpness, but have LESS distortion too? Just look how much more accurately rendered the circular satellite dish is (we will borrow RG forum terminology here and say it has great EOD: Edge Object Distortion) quality. And the brick courses are practically STRAIGHT. The Zeiss appears to be extracting a little more detail from the mesh but it is larger in the frame… so I’m not sure we’re seeing better pixels here, just more of them.

The Zeiss has gone all diffraction-squishy, but the Nikon has opened up an even wider advantage. Now there’s no excuse for soggy corners at f16 . . .

. . . and sure enough the Zeiss just about renders a moderately sharp corner, but still the merest hair behind the Nikon, which of course retains its geometric distortion advantage. There’s more to a great wide angle than sharpness and distortion, of course: what about CA? Here’s a 200% scaled crop of the opposite corner, full of deadly CA-inducing foliage . . .

At last, a test the Zeiss 18mm wins: there is hardly any CA in the extreme corners, and there is some in the (much sharper) Nikon crop.Bear in mind that this is a 200% view of the very cornermost 400×280 pixels of a full frame 16.7MP 1Ds II shot. Neither lens could be considered problematic in this area.

Secondly, there’s little point doing so. Apart from the CZ21, every wide angle lens has soft corners on a 1Ds II at f5.6. Most are still soft at f8.

There are some who claim that all lenses are much the same when you stop them down. Every wide angle test I’ve done gives lie to this myth. There’s quite enough excitement for me in comparing them at f11, thanks.

Bottom line: this sample of the AFS17-35 is pretty spectacular – fractionally better than the Olympus 21mm, decisively superior to the (or this, at least) Zeiss 18mm f4, and not far behind the Contax Zeiss 28mm Distagon. I have to say that I fancy its chances against the Leica 19mm f2.8….