Yet for Nikon users it’s true: in many cases the classic AIS series manual focus primes are unsurpassed by modern designs. You can point the finger at company politics, cost and corner cutting, or the appetite of the convenience generation for AF zooms, but the fact remains unaltered that – ironically – the best partner for a state of the art digital SLR (Canon or Nikon) is often a 20 year old lens.

Here then, head to head, is the very shiniest of the nu-skool up against a relic of the cold war era: the Nikon an exotic vintage throughbred, the auto everything Sigma 12-24mm zoom freshly fêted as Lens of the Year, mass produced by a third party manufacturer with bleeding edge tech and the cheapest possible materials. Plastic? Yes. Fantastic? We’ll see.

Despite the immediately obvious difference in colour – neither are neutral – centre frame the Sigma zoom is clearly resolving better than the Nikon prime. However, recent testing of Nikon’s 14mm made me wary of trusting a centre frame crop alone. Wide open, the 14mm has a weird toroidal focal pattern that surrounds a soft centre frame with a ring of higher resolution before gradating back to poorly resolved corners. So it proved to be with the 15mm.

17mm from the image circle centre, the Nikon looks much sharper, entirely reversing the centre frame results. The Sigma behaves as we might expect: resolution and light falling off in proportion to its distance from the centre of the image circle. The Nikon is playing by different rules altogether. As we move out to the extreme corners, however, we see the intial results reprised:

Allowing for the fact that the Sigma 12-24mm is inherently not a very high resolution optic, a healthy one turns in commendably consistent corners even at wide apertures. Or is it just that it looks good next to the Nikon 15mm?

… but at least it’s consistent across the frame.

If you need to see the mesh on your satellite dishes when shooting with a lens this wide, you probably need the Leica or Zeiss 15mm. Watch this space!

Pretty much a repeat of the f11 picture here; neither shows significant diffraction softening by stopping down from f11: for all the difference it makes, centre frame resolution for these lenses peaks at f8.

Unsurprisingly, extreme corner crops show the benefit of stopping down this far – the Sigma even more evidently than the Nikon 15mm, which still doesn’t deliver enough information at f16. For critical work, f16 is the only really useable aperture on the Sigma 12-24mm, but here it is quite serviceable.

Distortion/Vignetting (f5.6)
Rollover the Sigma 12-24mm image (below) to reveal one made by the Nikon 15mm AIS.

Respect due to both lenses for outstanding geometry. The eagle-eyed may spot a whisper of waveform distortion in the Nikon 15mm and the merest trace of barrel distortion from the Sigma 12-24mm, but these are very minor quibbles. How – and why – Nikon ‘updated’ this lens to endow it with such horrendous waveform distortion is a mystery.

Impressive, too, is the lack of vignetting: the Sigma frame isn’t as evenly illuminated as the Nikon 14mm’s, but neither are problematic.

A rectilinear object in the frame corner reveals that suggestion of waveform distortion in the Nikon shot, as well as some chromatic aberration. The Sigma 12-24mm is unimpeachable on both counts.

[nextpage title=”(Not Quite the) Conclusion”]

A triumphant hurrah for progress? With reservations, yes. Bearing in mind the practicality the Sigma zoom affords, and its impeccable behaviour with regard to geometry, aberration and corner-to-corner consistency, we’d perhaps be churlish to complain about its relatively low resolution. Its colour rendering is on the warm side (stopping just short of full blown ‘Sigma Jaundice’) but all told it’s another impressive victory for modern technology.

The Nikon 15mm f3.5 AIS is not without merit, though. If only it maintained the resolution of which it is capable evenly across the frame. The problem is particularly acute at smaller apertures, as was the case with the Nikon 14mm – both lenses displaying a weird rippled, toroidal plane of focus (like a slice of doughnut)…

And you know what? At this point (somewhat late in the day) it occurred to me that the adaptor which worked so well on the Nikon 28mm might not work as well with the ultrawides. A similar problem can occur with adapted Contax lenses, as Pham Minh Son discovered…

So the tests were re-run at f5.6 and f11 with the thicker FotoDiox pro adaptor which has a deeper register than the Japanese-made items I customarily use with longer Nikon glass. Observe the difference:

More results (and the final conclusion) on the next pages…

It’s immediately obvious that the thicker adaptor makes a big difference to the performance of the Nikon 15mm. The focal plane is predictably flat, and centre frame sharpness is now better than the Sigma, reversing the previous result.

Out near the corner, in this 100% crop showing both near and far field objects, the Nikon 15mm behaves like an entirely different lens: outperforming the Sigma 12-24mm by almost as great a margin as that by which it was outclassed in the previous test.

Centre frame, at f11, the difference is slight, but whereas the Sigma 12-24mm was a minor improvement in the previous comparison, this time the roles are reversed, and the Nikon perhaps just edges it on the FotoDiox Pro adaptor.

Once again the Nikon 15mm with the right adaptor proves itself superior to the Sigma zoom, the gap between them widening at the edge of the image circle.

Unfortunately, the right adaptor doesn’t eliminate the elderly Nikkor’s tendency for aberrations. These crops are 100% from the extreme upper right corner (full frame).

If you can overlook the exposure difference in the original (adapted Nikon lenses consistently require about half a stop’s underexposure), you may notice that the Sigma lens has a touch more light fall off than the Nikon, which is exemplary. This modest vignetting makes for a more attractive rendering of trees against sky above!

Both are superbly corrected for geometry: the Nikon, as previously noted, has the merest kink of barrel distortion compared to the ruler perfect Sigma.

The Nikon 15mm AIS has a bad reputation for ghosting and flare. Ken Rockwell’s test pratically writes off the lens as unusable, claiming an invasion of blue blobs whenever light is present. I have to say that this sample wasn’t troubled overmuch by these symptoms. Problems can arise when light strikes that bulbous front element obliquely, but the same is true of most ultrawides.

So here’s how they perform with a strong, naked point light source firing straight at them from a distance of about three feet: first the Nikon: 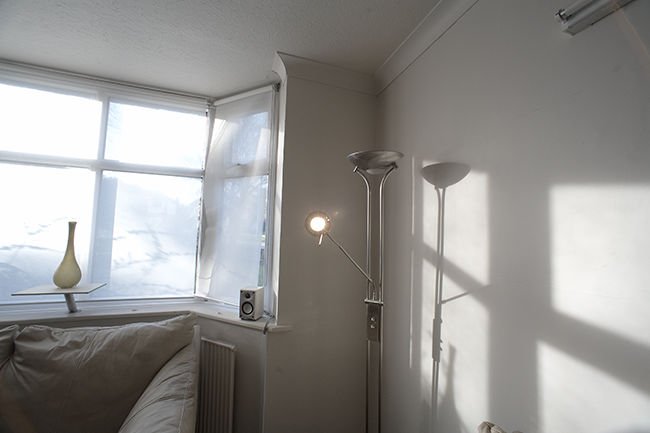 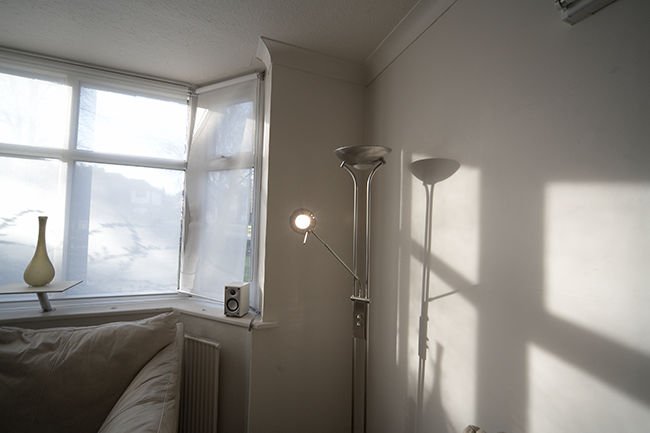 Note the relatively warm/yellow cast of the Sigma, and slightly better controlled flare performance. Neither could be considered problematic. Obviously shooting into the sun would induce stronger symptoms, but very rarely did I experience Ken’s blue blob syndrome unless I tried to reproduce it. Even then, a judiciously positioned hand just made the problem vanish.

Perhaps the most important conclusion derived from this test is the critical importance of the correct adaptor – the wider the lens, the more important it is to get it right.

It would be easy to buy a Nikon 15mm, test it against the Sigma, and conclude that the game wasn’t worth the candle. I did. And with a too-thin adaptor, you would be right. The Sigma 12-24mm’s appeal is how well behaved it is: uniquely versatile, practically zero aberrations and, stopped down, moderately sharp. It’s hard to better.

But, properly adapted (FotoDiox Pro recommended) the Nikon 15mm f3.5 AIS is significantly sharper at all apertures, and also extremely well geometry-corrected. It does require shading to avoid flare resulting from light obliquely striking the bulbous front element, and some post production to fix the CA, but it is capable of producing results beyond the Sigma’s ability – for a fraction of the outlay of the Zeiss or Leica 15mm.

How it compares to the Zeiss and Leica will be the subject of a future test….