As eagerly anticipated parcels arrive across the world, initial samples are appearing online: everyone wants to know about Nikon’s groundbreaking ultrawide zoom, the 14-24mm f2.8 G. Most copies of this lens are destined for use on the Nikon D3: the fruitage of many years furtive full frame development in order to rival Canon’s dominance of the high end DSLR market. In a rare example of joined up thinking (please take note, Canon!) Nikon released a brand new killer app with their brand new killer camera: the 14-24mm was designed from ground up to be the perfect full frame (FX) ultrawide – a feat which still eludes Canon despite their many accomplishments. So naturally, in the long standing spirit of this website, we were keen to be the first to trial it on a Canon full frame because we hope very dearly that this lens – and this lens only – will be the reason to buy a 1Ds III.

This is not a full review: only a single aperture was tested, chosen to provide some common ground between the two comparators selected for perspective. As recent tests showed, there are many ways to shoot at 24mm – even the humble 24-105L is on the money: however, our lens of choice here is the 24mm f1.4 L which stands a clear notch above anything else at the focal length. At f5 its performance is superb across the frame, improving a little in the corners one stop down, but comparing very favourably to the legendary Zeiss 21mm even at this aperture. It’s not perfect (there is awkward field curvature, near-field performance isn’t in the Distagon’s class, neither does the colour rendition have its clarity and ‘freshness’) but there’s nothing better. Shooting the Nikon zoom against it was a hiding to nothing: pitting a zoom, at its weak extremity, at a difficult aperture, against the best prime available – at its f5.6 sweet spot.

The Sigma 12-24mm illustrates how difficult a feat this is: 24mm / f5.6 is the best way to make this otherwise impressive lens look terrible. Once again forcing the new Nikon onto the back foot, we backed the lens out to its other extremity and denied it the camouflage of diffraction to shoot at 14mm / f5.6. As you no doubt know, many ultrawides perform relatively similarly at f11 (though the best still distinguish themselves), but they’re worlds apart at f5.6. Thus with one incisive thrust we hope to reveal something of the character of the new lens. Rest assured we’ll be putting it through its paces more thoroughly in forthcoming weeks.

The other big news is that development is nearing completion of the Nikon G-Canon EF adaptor which allows this and any other Nikon G lens to be mounted on Canon DSLR bodies – with full aperture control. Please note that this brief test was conducted with a prototype adapter uncorrected for registration; final production versions may further increase sharpness and reduce apparent chromatic aberrations. More on this later . . . .

Remember what I said about the Sigma? It’s pretty shoddy at 24mm, needing to be stopped down well beyond f5.6 (its maximum aperture at the long end) for serviceable results. For this quick test, I didn’t exhaustively check the focal plane and try to compensate for field curvature, so the Nikon is focused slightly closer than the Canon. Careful examination of the full frame, however, gives confidence that both lenses outresolve the 5D centre frame at this aperture. Full marks.

Out in the extreme corner of the frame at a distance of approximately 15m, the Nikon zoom delivers a truly astonishing rendition. Though it can’t quite match the sheer resolution of the Canon L prime, the beautiful microcontrast and limpid clarity of those nano-coated optics shines through. Bear in mind, too, that the Nikon’s focal plane is positioned a little closer than the Canon lens’: nailing the focus precisely might even have given us some of the mesh texture evident in the L capture. When you consider that the Nikon covers a similar range to that of the sludgy, yellow Sigma, its performance is all the more impressive. But that’s not all . . .

Even more amazing is the Nikon’s close up performance. Note the way even the L prime loses its resolving ability in this near field bottom right corner: despite being in focus, resolution is not maintain all the way into the corner – a typical problem for any wide angle at close distances. The Nikon 14-24mm continues to re-write the rules: somehow delivering extremely crisp detail all the way to the cornermost pixel despite this sample being no more than 1.5m in front of the lens.

Thus far, then, we might reasonably conclude that the 14-24mm is as good as the 24L at the long end. I’m going to say that again, because if that really pans out to be true, it would be almost beyond belief: the Nikon 14-24mm f2.8 G appears to be as good as the Canon 24mm f1.4 L.

The Sigma 12-24mm (all the copies I’ve tested, at least) tends to love the 14-18mm range and gets a bit twitchy at the long end. To put the following results into context, this copy of the lens performed about as well as the Canon 14mm L Mark I (more on the Mark II later). With the right adaptor, it was outresolved by the Nikon 15mm AIs and Voigtlander 15mm but they have other flaws that make them hard to recommend. Similarly the Zeiss Distagon 15mm proved to be of very similar character to the Nikon (same design, of course). It’s improved coatings eliminate the Nikon version’s Achilles’ heel, but the difference between it and the Nikon (or the Sigma) makes it hard to justify the extra cost. So the Sigma has become our benchmark ‘user’ lens: it may not quite be the sharpest tool in the box, but its versatility and all-round good behaviour has earnt it a permanent berth in our shooting bag, and similarly in the kit list of many architectural photographers around the world. Are its days numbered, I wonder?

We’ve seen the Sigma bettered for resolution before, but I don’t recall seeing it thrashed quite as soundly as it is here by the Nikon 14-24mm: that’s certainly a Zeiss/Leica level centre frame performance at f5 (f5.6 for the Sigma).

Remember how we used to say that the Sigma 12-24mm had ‘no CA’? Well, if that was true of the Sigma, it’s true of the Nikon in equal measure. Though there are traces in this ‘worst case scenario’ scene, it’s very well controlled: better than any other ultrawide I’ve seen. That tempting little morsel of detail in the foreground reveals a fraction of the astounding Zone C performance of this lens. Here’s more:

Wonderful. At 14mm, the Nikon 14-24mm is a whole new level of performance: it’s not so much that it rewrites the rules, it doesn’t seem to be aware of what the rules are . . . sharp, vignette-free corners at 14mm / f2.8? No problem! With performance this good at f5.6, I think we’ve just found a lens that may challenge the Leica 15mm f2.8 for the title of ultimate ultrawide. Without question, this lens is at least as good as the Zeiss 15mm f3.5.

Is there a better 24mm lens? Maybe – but not by much. The 24L is pretty special, and two stops faster, so it’s unlikely to be dethroned in the near future. But the Nikon zoom is as good as anything else you can use at this focal length.

Is is better than the Leica 15mm f2.8? Ah – good question! Can I get back to you on that when my 1Ds III arrives? It may be the only tool capable of giving us an answer.

Is it better than the Zeiss 21mm? Oooh, now you’re asking . . . perhaps not. But we’d have to define ‘better’ better: is it as high resolution? Perhaps not – though given the fact that the Nikon comes very close to outresolving the 5D in the corners makes this something of a moot point. Colour? Zeiss – just: but the Nikon glass draws very similarly. Distortion? At 21mm, no contest: the Nikon is much better. Flare and ghosting? Nikon (just) again . . . .

Is it perhaps the most impressive wide angle lens ever by a huge margin? Yes, and yes again. Run – really, run to your local dealer and buy one as fast as you can. Then sell all those other lenses it replaces and treat yourself to a case of Chateau d’Yquem with the proceeds.

Still very much in the ‘first impressions’ vein, my next attempt to make it look bad saw me shooting at ISO400 with the Canon 5D balanced on its Arca mount on the chopping board: wide open at a distance of less than 1m (about three feet). I know it’s wrong, but this lens just brings out my inner Ken Rockwell. The focal length was 18mm, the exposure was 1/20s at f2.8 . . . same C1 settings as before: no noise reduction and a modest PS USM. As shown below, samples were taken at 100% from Zone A, B and C:

As you might expect, it’s not quite vignette-free, but for a lens this fast and wide, it’s another fantastic performance, requiring only minimal correction. The moderate barrel distortion (remember this is pretty close) looks simple to correct also. 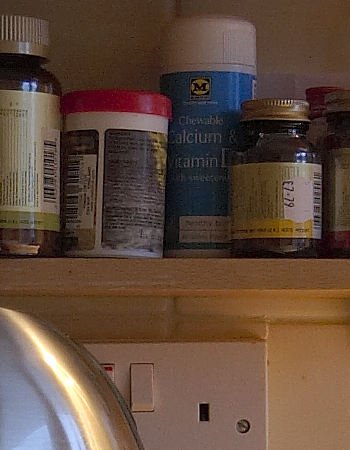 Noise reduction was turned off here, and USM was 120/0.3/1, so we’re seeing some shadow noise in this ISO400 shot, but the level of detail delivered is unimpeachable: centre frame this is a very sharp lens. And in Zone B, it looks like we have not only superb field flatness, but equally high resolution: 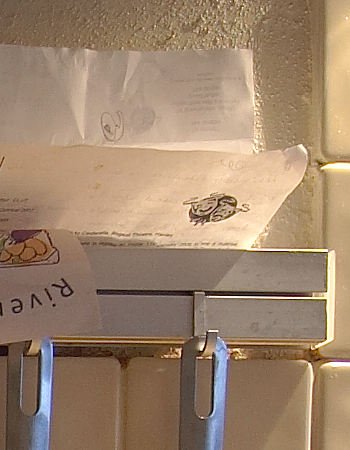 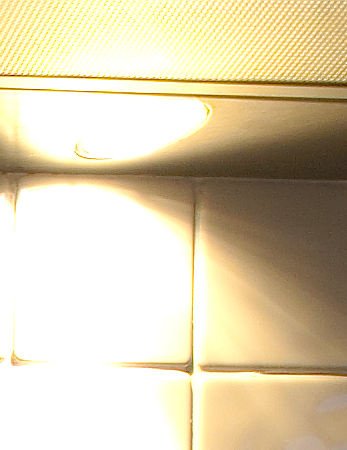 Hard to believe that this is the upper right corner (Zone C) of an 18mm lens at f2.8. That waffle texture is the extractor filter which is here sweetly rendered without coma or drastic resolution loss. Amazingly, it looks like you really could shoot this lens wide open and not worry about the corners. Reviewing my Zeiss 21mm captures, I have to say that even the Distagon is not sharper than the Nikon in Zone C, though I suspect that the 1Ds III may reveal that the Zeiss has a little more in the tank for Zone A . . we’ll have to see.

Looks like the adaptor is doing its work properly, too, which is enouraging: barely any CA wide open. More on this and a flare/ghosting update soon . . .