Over here, Nikonians; over there, Canonites – and ne’er the twain meet. Team Nikon loves its 17-35 and Camp Canon loves its 16-35. Each claims the superiority of its champion but rarely are they tested head to head.

Nikon-EOS adaptors enable the comparison to made easily enough, but in practice is the Nikon good enough to justify the loss of auto focus and the complication of stop down metering?

I suspected that defining ‘better’ in this instance would be slippery: even the Leica 21-35mm is not equally rectilinear at all focal lengths. Both these lenses have differing distortion characteristics throughout their range, so your verdict will likely be weighted in favour of your preferred FOV – which end of the zoom you use the most.

Further muddying the waters, it seems to be beyond the limits of mass production technology to make a lens this complicated, with such fine tolerances, and to make them all the same. More than any type of lens, wide angle zooms are bedevilled by sample variation – likely you have heard many rumours about ‘good’ and ‘bad’ specimens and stories about manufacturers calibrating them back to nominal spec.

Finally, after many months research, trial and (mostly) error, I have in my clutches what I believe to be optimal copies of both lenses.

As previous tests on the 1Ds II have shown beyond doubt, a healthy Nikon 17-35mm AFS is capable of performing at the highest level, rivalling any prime in the 19-21mm range. If yours hasn’t impressed you, give it to Nikon for a few weeks; it will when it’s recalibrated. I was lucky enough to pick a great one first time.

The Canon 16-35mm also gets a mixed press. Mike Hatam tried six copies before finding an acceptable one. At the time of writing, the rumour mill is grinding out a line about improved QC since the summer; but who knows? In the light of such uncertainty I went straight to the horse’s mouth: this sample comes direct from Canon UK on loan and proved to be as good a 16-35mm as I’ve ever seen or used.

With the playing field as level as possible, let’s consider the tale of the tape… 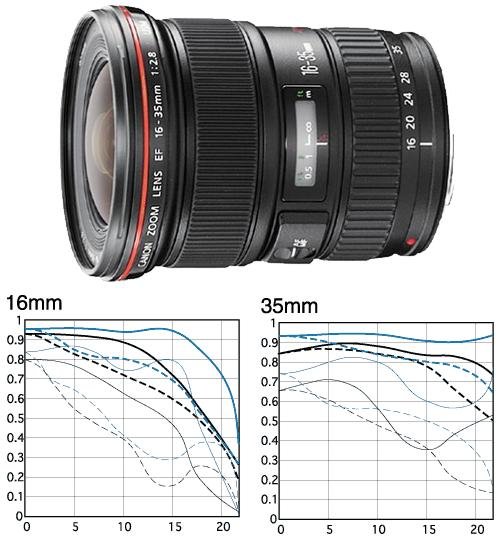 These are both serious bits of kit: the Canon is 103mm long, 600g in weight and contains 14 elements in 12 groups. Filter size is 77mm and minimum focus is 28cm. Build quality is exemplary: fully weather sealed and meatily damped focus and zoom rings. Canon’s commitment to full frame has helped the resale value of these lenses no end, whereas second hand Nikon’s can be had for much less, such is the appeal of their outstanding 12-24mm. 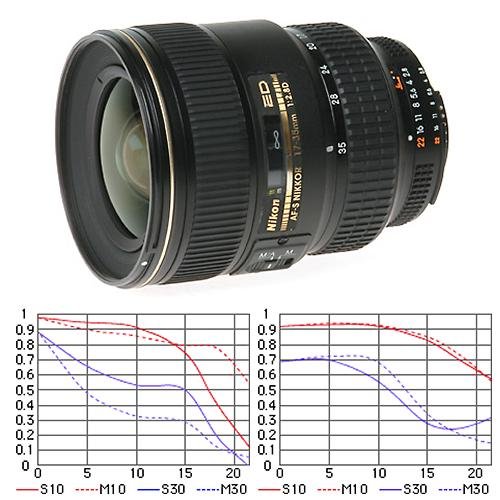 Weighing 750g and feeling like it’s hewn from an ingot, the Nikon nonetheless has zoom and focus rings that glide rather than merely rotate. The length is similar, at 107mm, inside which 13 elements are arranged in ten groups. Minimum focus is also 28cm.

It’s worth spending a bit of time perusing the manufacturers’ MTF charts here: strictly, one should only compare lenses MTF assessed using the same equipment and methodology, but assuming these data are comparable, and refer to wide open performance, on paper at least the Canon appears to be streets ahead.

As we shall see, in practice this is both entirely true and absolutely misleading….

Commendable centre frame resolution from the Canon, less impressive from the Nikon. But before leaping to conclusions, here’s a corner.

The reversal of the centre-frame verdict is in line with the results of the Nikon 14mm test: both Nikon lenses are tricky to evaluate comparatively because the field of focus is far from flat: wide open, the Nikon is softer centre frame, but has superior contrast and corner resolution.

Still at f2.8, here’s a 200% sample from a region toward the edge of the image circle to show off chromatic aberration.

Clearly better colour control by the Canon, though both are respectable in context of similar lens’ performance.

Rollover either image to compare and contrast the Nikon’s distortion and vignetting performance at 17mm / f2.8. 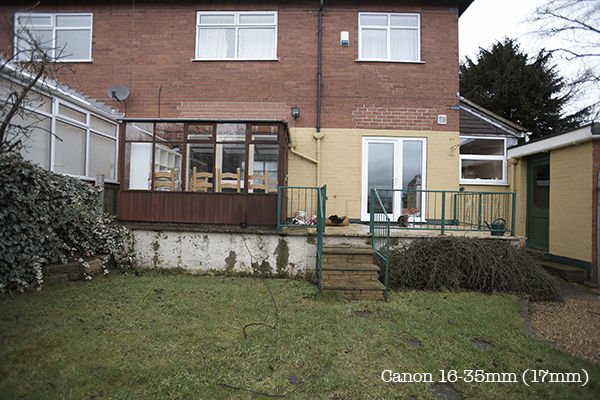 Wide open at this focal length the Canon is better behaved: not only is it better geometrically, it is less prone to vignetting: perhaps half a stop less light fall off in the corners. At 17mm, the Canon has a very subtle waveform distortion pattern compared with the Nikon’s more pronounced (but easier corrected) barrel.

The Canon also appears to be wider at an indicated 17mm. The apparent rise seems to be an artefact of the Nikon-EF adaptor.

You might also notice even at this size the more contrasty nature of the Nikon ED glass compared with the Canon L. Given a gloomy scene like this, colour differences are minor. The Nikon on average, though, is slightly warmer, more saturated and, to me, preferable.

Stopped down to f5.6, the Nikon improves considerably centre frame, to the point where the pair are hard to separate: honours here just about go to the Nikon on close inspection.

However, the corners are even further apart: here’s a 100% crop from the extreme top right this time.

. . . and even in the corner there’s little to choose between them at this aperture – though even here the Nikon’s inherently higher contrast gives it the edge once again.

Here seen resisting diffraction effects better than the Canon L, the Nikon 17-35mm AFS is pulling just a fraction more information from the scene. Needless to say, by this aperture the difference between them is negligible.

Up in the branches in the extreme corner, we see purple fringing from the Canon and blue from the Nikon, even at f16. For resolution there’s little to choose, though once again the Nikon perhaps just shades it.

Rollover the Canon full frame to reveal the Nikon shot. 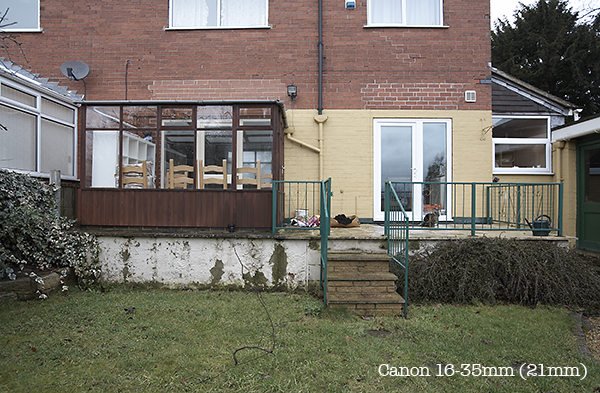 There’s still some tricky waveform barrel distortion at work in the Canon shot: not significant enough to be a problem in most images, but just enough to push parallel lines out of true. The Nikon 17-35mm, however, has lost almost all of its simple barrel distortion by 21mm and is perfectly useable for critical architectural work with only modest correction.

Rather than wrestle with the Nikon’s eccentric wide open field rendition at longer focal lengths, subsequent comparisons will be shown from f5.6 up.

Reprising the 17mm results, here (above) the Canon looks a little better centre frame at f5.6 . . .

Take your pick: at this aperture (and flat centre frame lighting) the 5D is incapable of putting much distance between them. Again, the Nikon is a hair sharper.

And once again the Nikon proves much sharper in the corner, even at f11. As previous tests have indicated, the Nikon just owns this focal length. It is truly world class.

For the sake of brevity, I’ve omitted the f16 versions of this test: there are no surprises: both were slightly softer, and the Nikon was still slightly sharper than the Canon. On to 28mm . . .

As you might expect, both lenses increase in resolution as they increase in focal length, bending light more gently towards its destination. However, both similarly suffer from an increasing tendency toward pincushion distortion at the long end of their range, in common with most SLR zoom designs. Here then is how they both look at 28mm: (roll over the Canon image to reveal the Nikon frame) . . . 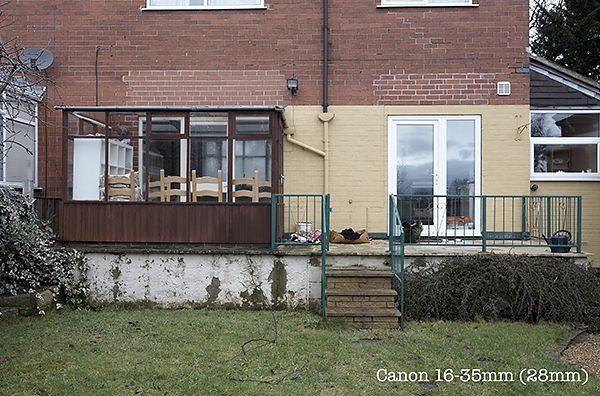 Once more the Canon is wider than indicated (or is the Nikon longer?), and both suffer from pincushion. The Canon 16-35mm has less distortion overall, but it’s distortion is kinky – harder to fix. The Nikon’s is more uniform in outline, but more severe in scale. Neither are close to a decent prime like the Nikon 28mm f2.8 AIS. And neither can be corrected without damaging the end result.

Here’s where it all comes unstuck. The 16-35mm I received from Canon UK had come direct from their service department, complete with dated inspection dockets. However, it swiftly became evident that it was decentred. Exactly as two Sigma 12-24mm previously tested had been. From about 24mm up, the right side of each frame was defocused. Tantalisingly, the nicely sharp left edge of each shot in the series suggests the possibility that from f8-f16 the Canon may be sharper in the 28-35mm range.

At f4, there’s no question that the Nikon is sharper the Canon across the frame; even though the Canon’s left edges look good at smaller apertures, there is no spot in the frame where the Nikon isn’t sharper here.

Looking at the right edge at f8, we see a nice sharp left side from the 16-35mm, and this on the right:

Yet at f16, a comparison of the upper left corners is revealing.

Close inspection of the left edges of the frame indicates that the Canon at least matches the Nikon at 28mm from f8 up. We find a similar story at 35mm….

Roll over the Canon image to reveal the Nikon frame) . . . 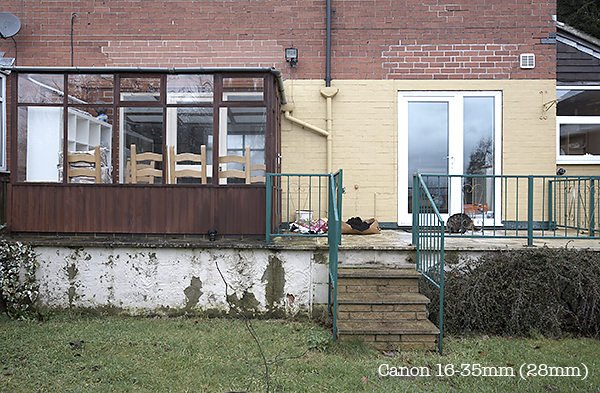 Unfortunately we find the same story at 35mm: defocused right side rendering. However, once again the left side offers promise of excellent performance. Consider these 100% crops from the extreme corner at f11 / 35mm:

At the risk of interpolating/extrapolating a little myself here, it looks to me as if the Canon 16-35mm’s resolution improves as it’s focal length increases to a greater extent than the Nikon. The 17-35mm looks better at the wide end than the Canon, but doesn’t appear to resolve as strongly in the 28-35mm range.

No easy way to pick a winner here. But before I try, please be aware that earlier tests in this series were conducted with a Canon 1Ds II, and later ones (including this one) were made with the rather easier to please Canon 5D.

I reluctantly came to realise that the 1Ds II is wasted on the wide glass available for it. So I traded down, losing a shedload of grief along with those six million pixels. I now shoot blissfully and ignorantly within the performance envelope defined by the 5D’s Xum pixel pitch.

The relatively undiscerning nature of the 5D (compared to the 1Ds II) means that the key advantage of the Nikon 17-35mm is arguably wasted on the 5D. What I can tell you is that if you trade up from a 5D to a 1Ds II, the Nikon has the resolution headroom to grow with you. The Canon won’t be quite as comfortable.

Here’s how they compare, point for point, the preferable lens marked.

Variation is an issue with both; as is condition. A good sample of one will outperform a bad sample of the other. Which makes any conclusion a statement of probability rather than a verdict.

Given optimal samples, however, the Nikon is likely to be a sharper lens overall, especially at the wide end. Its resolution advantage offset by a modest CA handicap and problematic distortion in the 24-35mm range. Up at 28-35mm, however, it seems likely that the difference between them narrows, and it may even be that the Canon is a little sharper. Hard to tell from one half of a frame.

An healthy Canon 16-35mm is a steady rather than spectacular performer: pleasant colour; fairly well controlled aberrations; tolerably sharp and on the pricey side of reasonable. Of course it has all the ‘normal’ metering and AF functions, which may or may not be important to you.

Frustratingly, the Nikon’s soft wide aperture centres mean that it can’t wholeheartedly be recommended to those who need uncompromised wide aperture performance for landscapes. It is at least sweet by f5.6, whereas the Canon needs f8/f11 for acceptably sharp corners.

For not a lot more money the Leica 21-35mm is a notch above either in the 24-35mm range, but no better than the Nikon at 21-22mm. Ultimately, your choice will be dictated by the candidate’s least unacceptable failing, rather than any outstanding virtue. That and your chance of finding a good sample.