So what is the best 28mm lens? Is it the so-called ‘Hollywood’ edition Zeiss f2? Te Nikon f1.4? Surely the Leica 28mm Super Elmarit is in the top three? Quite likely each of these in their own way can lay claim to some kind of superlative, but for argument’s sake let’s assume that your critical shooting is done at f8 or f11 and distortion correction is also a priority (in which case you probably shoot buildings of some kind). Alternatively, let’s assume the budget won’t stretch to these exotic beauties – what then?

Fortunately there is a B-team of 28mm superstars that at middling apertures rival or even exceed the performance of their A-list counterparts, and cost little more than a bag of chips… enter the cast:

This is a pretty special lens: eight elements, Close Range Correction, and a minimum focus of 20cm. Having been in continuous production for more almost 26 years there are lots of them about, and the early ones are usually rated on par with the very best.

The f2 is a real ‘it’ lens – legendary, fast, glamourous, discontinued. To this day accused of being Olympus’ sharpest lens, it is almost impossibly smaller and lighter than its slower f2.8 competitors at just 245g. A nine-element design with a close focus distance of 30cm, it too features a floating element for uncompromised close range performance.

A classic (by which I mean ancient) Distagon, this 280g seven element design has also stood the test of time, still topping by some margin photodo’s MTF rating for f8 performance in a wide angle lens. Unlike the others, however, it omits a floating element and only focuses down to 40cm. But it has all the typical Zeiss virtues: very high resolution and accutance, excellent geometry and CA correction, and finely crafted to boot.

But how do they perform?

All images shot with a Canon 5D in RAW, processed in 8 bit via DPP and converted for web with BoxTop Pro.
[nextpage title=”Performance”]

As you might expect, centre frame all three contenders justify their reputations, and handily display all the trademark characteristics of theire respective brands: the Nikon contasty and neutral; the Olympus warm and Leica-like in its soft, detailed shadow rendering; and the Zeiss delivers icy-cool colours, extreme accutance and that limpid 3D quality. I must confess to favouring the Contax here.

Now this was unexpected: I was prepared for moderately soft corners at this aperture, but I wasn’t expecting the Zeiss to be this bad – its resolution loss is quite graceful compared with the Olympus, but look at the vignetting! And I wasn’t ready to accept that the Nikon AIS would perform so strongly at this aperture. The first sample I tested gave similar results to the Olympus, but this sample is so much better, and just humiliates the Zeiss.

You will notice that the Olympus has messed everything up by being a little wider than the other two, making absolute comparison more awkward. It’s nonetheless evident that is comes a tied second with the Zeiss, some way behind the Nikon here. Incidentally, these crops are about 25 pixels out from the extreme corner of the frame – I blame the 5D viewfinder.

I swear these have had the same sharpening applied: the Zeiss has such extreme accutance that even this relatively modest 150/0.5/3 USM almost tips it into the realm of oversharpening, whereas the Nikon and Olympus by contrast look as if they could take some more! From f8 to f11, this lens is so sharp that USM is almost unneccesary. Photographers and hobbyists spend so much time obsessing over getting their lens to look sharp enough, but this one is almost too sharp. It’s interesting to look at the histograms for these three images:

Zeiss optics are sometimes criticised for being too contrasty, but the 28mm Distagon has captured highlight information smoothly all the way to extinction, despite its appearance! This histograms also illustrate the way the Olympus lens has extracted a nicely gradated range of shadow tones, unlike either of its competitors. It wouldn’t be hard to bring in the white point on the Nikon and Olympus shots and interpolate the missing information, but the end result wouldn’t be as right as the Zeiss image which delivered all that information to the sensor in the first place. Having said that, look how abruptly it has clipped the shadows….

This also demonstrates what you can do with high-resolution, low contrast lenses in post production (Leicaphiles rejoice). Just for fun, let’s apply the same sharpening to that already eye-wateringly sharp Zeiss shot… 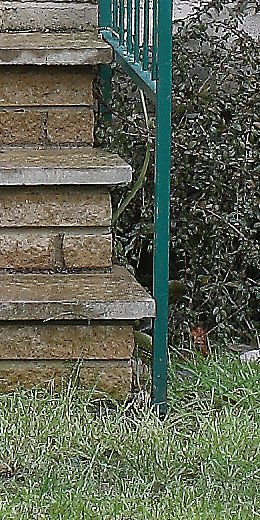 Ouch!! but we digress…

At f11 (and f8) the Zeiss really sings. But once again the Nikon is very close, and a notch above the Olympus every time. I wasn’t expecting any of these lenses to exhibit significant colour aberration; here’s a 200% crop of the extreme frame edge:

No major problems here: but once again just look at the Zeiss. You may have heard the urban myth about Zeiss lenses rendering more of a scene in focus than other lenses at any given aperture – well it’s true. They somehow manage to create a greater depth of field than other lenses. The effect is almost paranormal in the 21mm Distagon.

Finally, distortion and vignetting: here’s the Nikon 28mm full frame at f4: rollover the image to show the Zeiss and Olympus versions:

Final round clearly to the Nikon which achieves that rarest of objectives: perfect geometry. The Zeiss has a little barrel distortion, the Olympus has a little more. I suspect the Zeiss is the only true 28mm here: the Olympus is more like a 27mm and the Nikon a 28.5mm.

As ever with these single sample tests, I can’t guarantee that, for instance, the Olympus f2 here tested is the best they ever made. What I can say for sure is that this sample couldn’t live with the Nikon or the Zeiss.

However, as the salutory tale of two 28mm showed, not every Nikon 28mm is as good as this one, which I really liked. Not just because it was the nicest to use and the most satisfying in the hand, but because it is perfectly corrected, and by far the sharpest of the three at wide apertures, and it’s colour rendering is almost dead neutral – and it’s even the cheapest. That it isn’t more widely used on the 1Ds II I can only put down to entrenched Nikon/Canon rivalry. Great though Canon cameras are, they have nothing to touch this old AIS glass.

But at f8/f11 the Zeiss does magical things. You can chimp the Nikon and Olympus to look a bit similar, but it’s not the same. It’s not a perfect lens: it has barrel distortion, the vignetting at f4 is a throwback to pre-war portraiture, and you really do have to stop it down – but, like a turbocharged sportscar, when it comes good, it is breathtaking.

All in all, I think we have to call an honourable draw on this one: whether you choose the Zeiss or the Nikon will be more a question of preference than performance. Perhaps the best 28mm is a Leica after all?