So you’ve got your killer wide angle zoom: either the Canon 16-35mm L or the (better) Nikon 17-35mm AFS – or, if the budget won’t quite stretch (but the field of view must) you’re working around the limitations of the Sigma 15-30mm.

It has truly been said that you can’t have a film, sensor or lens fast enough. The success of Sigma’s 12-24mm proves that you can add ‘a lens wide enough’ to that greedy list. Indeed, shooting architecture in today’s claustrophobic interiors (cue puzzlement Stateside), wide is always good. No estate agent (‘realtor’) or housing developer (‘realtificator’, presumably) ever complains their interiors look too big.

So you’ve decided you need a 14mm prime. And you’re tempted by the even wider Sigma 12-24mm, but because it’s a SIGMA, and a zoom, and relatively cheap, and because you’ve heard all about sample variation and because There’s No Such Thing As A Free Lunch, you’re properly skeptical. It may be the Lens of the Year, but is it any good?

Here we test a good one against the latest Nikon 14mm f2.8 EDIF and the Canon 14mm f2.8 L – with particular reference to corner resolution and distortion.

First, here’s how they measure up physically . . .

Tests conducted with Canon 5D at ISO50 shot RAW with mirror lock up and processed via Capture One 3.7.3 into 8-bit Adobe RGB, sharpened in PhotoShop (135/0.5/3) and converted for web with BoxTop ProJPEG. All captures manually focus bracketed.

All MTF charts manufacturers’ own. Like-for-like comparison is invalid.

The L is the smallest, lightest and by far the most expensive of the group at 77mm in length and 560g, cramming in 14 elements in 10 groups. The build quality, however is superb, with butter smooth focus and a substantial metal lens cap that fits so snugly over the obscenely bulbous front element that you’ll be taking it on and off for fun. Close focus is 25cm.

Conspicuously of very similar design to the Canon, Nikon’s version also has 14 elements, this time in 12 groups, 85mm in length and weighing 652g. It, too, is a marvel of Japanese engineering fully equal to its rival in construction terms. Bringing a new, literal – and quite unwelcome – dimension to the term lens ‘hood’, Nikon ship this fabulously expensive lens with a floppy faux-leather fabric thing that entirely fails to protect the lens in use, and is a royal pain to put back on. Here’s a little secret, though: the Sigma 12-24mm and 15-30mm hoods fit the petal ‘shade’ perfectly and give you a proper filter ring. Don’t leave home without one. Close focus is 20cm.

In keeping with Sigma’s ‘big and light’ policy, the 12-24mm feels like it largely consists of air compared to the dense little primes. 102mm long and 600g in weight, it’s an entirely new 16 element / 12 group design which has broken new ground in design terms: other than the Voigtlander Super Wide Heliar, no other rectilinear full frame lens this wide exists – yet. In use, it clearly doesn’t feel as expensive as the primes, but it certainly doesn’t seem shoddily put together either. Zoom and focus rings come out of the factory too tight but loosen somewhat over time. Close focus is 28cm. 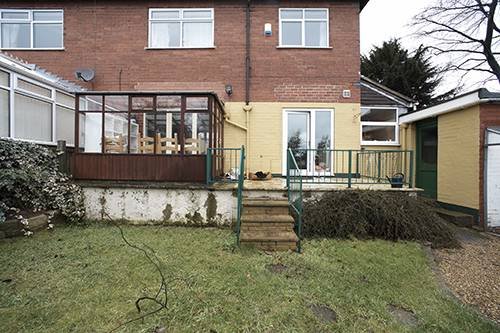 Here’s a fun new parlour game: take a Nikon 14mm and try to focus it wide open – anywhere at all. Instead of a plane of focus, you will find yourself wrestling with a weird 3D toroidal field of focus extending behind an in front of where you want it. Net result: baby soft centre frame surrounded by a ring of much higher resolution with a radius of 5-12mm, fading into dark, mushy corners. Here’s a few judiciously chosen 100% crops to illustrate.

Quite respectable – in fact, very good wide open performance from the Canon – and surely a focus error with the Nikon? But here’s another 100% crop just a few metres along what I had laughingly come to think of in the traditional sense as the ‘plane’ of focus:

Yes – not only the same lens at the same aperture, it’s the same capture – cripplingly soft in the centre, surrounded by a ring of extremely high resolution. Needless to say both have fairly soft corners wide open . . .

Again, impressive performance in the extreme corner from the Canon, but someone seems to have replaced my fabulously desirable and expensive EDIF Nikon with a Cheapola Distortamat. Hard to convey exactly how disappointed I am with the Nikon at this point, not to mention the fact that it took 12 exposures to even work out where the focus was.

By 14mm, the Sigma is already at f5.0 wide open (not the brightest of viewfinders to work with, therefore), so I’ve chosen f5.6 as the next comparison which of course handicaps the zoom somewhat. Not to worry: it will get its revenge at f16.

Before you leap to the conclusion that the Nikon is a total waste of space, check this edge crop:

Out in its annular sweet spot/ring/whatever, the Nikon is actually pretty great. And for all those ultrawide subjects where you need a soft centre frame surrounded by a hyper-crisp ring of resolution, this might be an ideal lens. You know, subjects like – uh… well… you know: there must be something this lens is good for? How about a paperweight?

What I’ve overlooked in all the excitement and confusion is that the Sigma is already matching the Canon 14mm centre frame – even at this aperture. However the Canon is pulling a lot more detail from the scene in the corners – but bear in mind that we’re comparing a prime two stops down with a zoom only half a stop from wide open. I’m impressed. We’ll consider distortion and CA later, but amazingly the Sigma renders ruler straight horizontals and verticals even in the extreme corner. And how many lenses at even twice this focal length are capable of that?

The less said about the Nikon the better. It’s some small consolation that the Nikon’s centre frame ‘sour spot’ has noticeably shrunk going from f2.8 to f5.6 – by it needs f11 to disappear entirely.

The other corner conveniently gives us a chromatic aberration yardstick. A caveat here: the Sigma exposure was about half a stop lighter than the other two, so it appears to have retained less high frequency information. In fact its corner performance at this aperture is very similar to the Canon, as we’ll see in a moment. The results speak for themselves: amazing CA control from the Sigma, excellent for the Nikon, and less impressive for the Canon.

Fortunately we have four corners to play with:

Excellent near-field corner performance from the Sigma: the Canon in fact is least comfortable at close range: these samples represent a subject distance of about 1.5m.

Not everyone gets why an f16 test is necessary: ‘With a lens this wide, why stop down that far?’, they ask. Most of those people tend to be locked into the film paradigm: in truth, given that wide angle lenses uniquely struggle to deliver resolution to a 16MP full frame sensor, even sharpness across the frame can often only be achieved by stopping down to f11/16. Which is why I maintain that an f16 optimised lens is far more useful than an f4 optimised lens – certainly for architecture. It’s another reason why I find Zeiss optics typically more useful than Leica!

As you might have expected, resolution differences have flattened out somewhat by this point, but interestingly, it is now the slower Sigma that appears to hold the advantage over either of the more exotic primes.

I’ve dropped down the test sample a little to demonstrate what CA remains at f16. All the uPVC visible here is white: any trace of green and purple (Canon) or red (Nikon) is an aberrant optical artefact. The Sigma has none. Not only that, but by f8 the Sigma has practically no vignetting: its uncommonly even illumination retains contrast far better into the extreme corners, giving the illusion of greater accutance.

For architectural applications – or indeed any use where straight lines must be naturally rendered – distortion control is critical. Sadly, it is very difficult to design even a retrofocus 21mm lens with this in mind. Compare the Zeiss Biogon with the Zeiss Distagon and you’ll see what I mean. One may as well ask for the moon on a stick as to request a 14mm that keeps horizontals and verticals true.

To see how these three compare, here’s the window from the top left corner. Great pains were taken to ensure that the camera back was absolutely parallel to the wall in order to really see what the glass was doing. These samples all at f16…

Even at close range (these tests were shot at a distance of about 75cm) the Sigma showed no more than a trace of waveform distortion.

Mouse over each of the Sigma 12-24mm frames to see how the same scene was seen by the Canon 14mm L and Nikon 14mm EDIF. 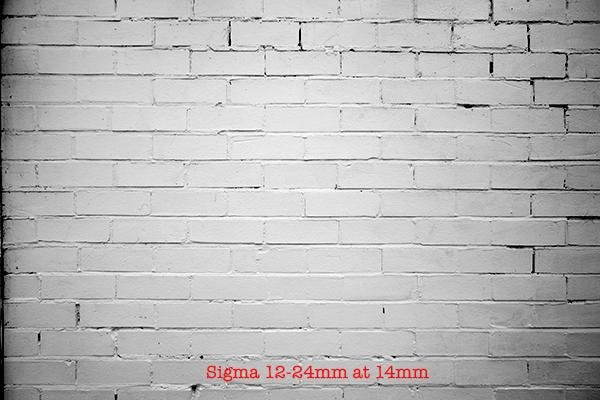 This test has been rather more exhaustive/exhausting than usual, exploring many (not all) aspects of this group’s behaviour, but the bottom line is that the Sigma is uncommonly well behaved for such a wide lens. To recap: it has no geometric distortion at 12mm, 14mm, 18mm or even 20mm. It has no chromatic aberrations. And it’s fairly sharp. Oh, and it costs one third the price of the Canon.

To be fair, the Canon deserves to cost a shedload: it is fully 1.75 stops faster than the Sigma, it is compact and beautifully built, it has very well controlled distortion and it is sharp to the corners by f8. And you can’t say that about many lenses wider than 24mm. Canon’s wide lenses take a lot of flak, but this one is genuinely world class. I’m not saying that it wouldn’t benefit from a bit of ‘Digital Edition’ trickery to keep the CA down, but on the whole it lives up to the expectations raised by the red ring on its rim.

The Nikon, however, is a stinker. As ever, it’s always possible this sample isn’t representative, but too many other reviewers have found the same problems with distortion for me to doubt these results too profoundly. Avoid.

Actually, given the problems I’ve had finding a 12-24mm worth keeping, the best advice I can offer is rather: buy LOTS of Sigmas; a good one is a gem, and accordingly worth hunting for.