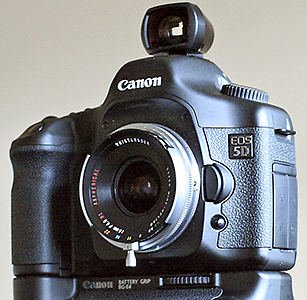 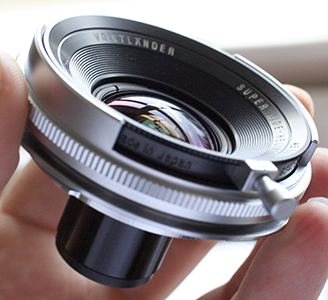 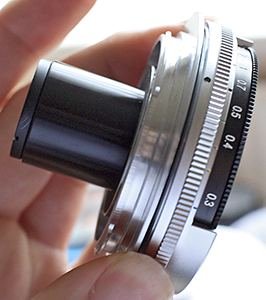 The Voigtlander 15mm f4.5. Where on earth are you going to put THAT?

First: yes, you can use Voigtlander’s true wide angle lenses on Canon digital cameras: here’s my 15mm f4.5 SL on an EOS 5D. They also make a very nifty 12mm rectilinear (more on this later). For mounting details, please below.

Other than sheer bloody-minded perversity, why would you want to do this? Because these little rangefinder optics are not inside-out telephoto lenses. When Voigtlander say the 15mm SL is rectilinear, they really, really mean it, to a degree that retrofocus SLR optics can’t approach. Rangefinder wide angles are much simpler to design, and have exit elements much closer to the film or sensor plane, making corner sharpness and field flatness much easier to achieve. Oh, and they are cheap!

It is generally agreed that the finest wide angle lenses are the Mamiya 7 43mm and the Zeiss Biogons. Anyone who has used either, especially those currently struggling to shoot architecture with a Canon 1Ds II, tend to come over all wistful and nostalgic at the very mention of their name. But can the Voigtlander Super Wides bring some of their ancient rangefinder voodoo to the age of digital capture? Can they slay the three-headed dragon of distortion, inadequate resolution and chromatic aberration? Or will the quest for wide angle image quality prove too perilous for even these exotic creatures? Let the trials commence….

Fortunately, Voigtlander’s range of highly regarded lenses are available in Nikon AIS mounts designed for older cameras that can operate with mirrors permanently locked up. A commonly-available Nikon to EOS adaptor takes care of mount compatibility without problems. There are some superb optics in this range that can be experimented with for very little outlay. The APO Lanthar 120mm Macro, for instance, is considered to be among the very best of its type available, competing on equal terms with the Leica 100 APO and Zeiss 100mm variants, according to some.

Lacking the Nikon bodies’ mechanical MLU, however, Canon users are forced to deploy more basic measures: these tests were accomplished by carefully raising the bottom edge of the 5D mirror to a horizontal position, while gently inserting the barrel of the lens underneath. The diameter of the rear element cowl is such that the weakly-sprung mirror comes to rest stresslessly on the lens itself.

Somewhat to my surprise, the camera didn’t error when the Mirror Lockup Custom Function was enabled. Beyond a slightly disturbing increase in the volume of the mirror slap (it was, after all, hitting the lens!), no ill effects were observed, and the camera reverted to normal operation without difficulty. No doubt this entirely invalidates your warranty blah blah blah and I couldn’t possible endorse or take responsibility for blah blah blah, etc, etc, etc.

Thanks to Kit Laughlin for suggested the simple and effective measure of attaching to the top half of the long rear cowl a strip of 2mm self-adhesive foam. This not only damps the impact of the mirror on the lens housing, but it reduces its travel, and therefore the velocity at which it arrives.

These are both s-l-o-w lenses: for each, f5.6 is only about one stop down. However, at this aperture the Voigtlander is much sharper and has transmitted a lot more information: the above JPEGs are 61K and 53K respectively. Note also the typical Sigma yellow/warm cast.

So where’s the chromatic aberration we were expecting? This is a 15mm lens one stop down, and an extreme corner crop from a full frame. Very impressive. However, the Voigtlander is here being handed something of an advantage in this instance: though the Sigma 12-24mm has predictably lousy corners at this aperture, what it doesn’t have is vignetting – I mean, practically nil.

To give a fairer comparison, here’s the top right corner which is drawn in far less flattering light for the Voigtlander.

So while the Voigtlander wins the resolution race, it really does suffer from pronounced vignetting at this aperture. In sky, I like vignetting. Vignetting helps. Vignetting is good. Vignetting works. But I don’t want to see it in brickwork, thanks.

The gap narrows: the Sigma 12-24mm has come on a bit since f5.6 whereas the Voigtlander is barely any sharper one stop down. It still comfortably retains the advantage centre frame, though.

Even in the far corners (the greater length of the Sigma makes equivalent framing almost impossible) the gap is narrowing; there is still more information in the Voigtlander shot, but at f8, its strong vignetting makes it hard to tell. Vignetting one stop down is forgiveable, but at f8 it’s out of order.

As you might expect, by f16 there’s not much to separate them. In fact, the Voigtlander 15mm is showing diffraction softening but the Sigma 12-24mm is just starting to look comfortable!

…and still the Voigtlaner vignettes. This particular sample of the Sigma 12-24mm actually renders a reasonable corner by f16 (not all do) and of course is much more useful out of the box that the 15mm prime which requires anti-vignetting correction at all apertures. 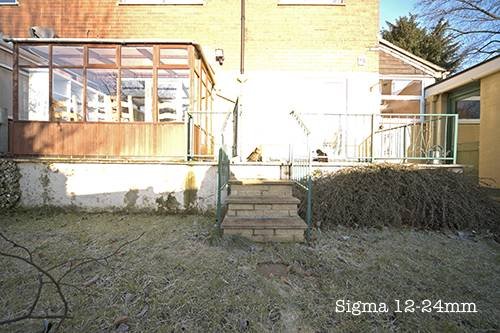 You can’t miss the vignetting at all apertures, which according to some reports is also a feature of its performance on the rangefinder cameras for which it was designed.

What you may also have noticed progressing through the 100% crops is the fact that, contrary to expectations, it is the Sigma 12-24mm that displays the best geometric correction, whereas the Voigtlander has some very subtle waveform distortion.

It should be noted that correcting for this vignetting is a piece of (non-deleterious) cake. A five second Quick Mask/Gradient/Curves action on each image would harmlessly fix the problem and give a better result than the Sigma every time. The Voigtlander at least gets enough information to the sensor to allow corrections to be made, like this: 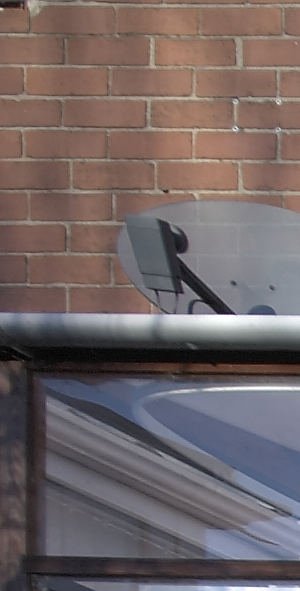 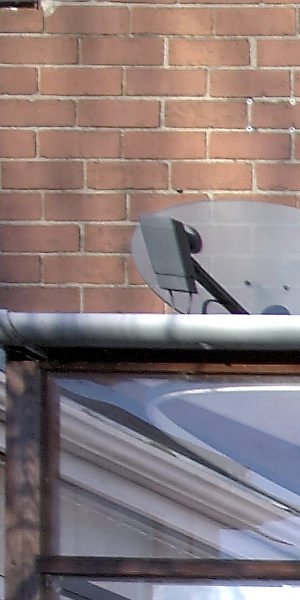 So, we can pluck a rangefinder lens out of a Leica; we can adapt the mount and, with a little trepidation, we can sweep aside the mirror and force it down the gullet of our Canon digital cameras. But should we?

The Voigtlander 15mm Super Wide Heliar is sharper across the frame at pretty much all apertures. It’s corner performance at f5.6 and f8 is much better than the Sigma 12-24mm. It is certainly amazingly compact and portable on the camera, and makes a fabulous focus and forget hip shooter out of your 5D, with superb wide aperture performance… but every shot requires vignetting correction, the viewfinder isn’t the last word in utility and you do have to go the extra mile in forgoing even aperture priority metering.

Then again, the Sigma, for all its good behaviour, is no angel. This, the fourth sample I’ve tested, shows major decentring at the long end, making it unusable from 20mm up. But if you can find a sample that works, the combination of convenience and acceptable (if not stunning) performance of the Sigma 12-24mm makes it a tough act to beat if you’re prepared to stop down to the tiny apertures required for it to perform.

In other words, it’s hard to recommend either lens unreservedly. Much will depend on your priorities, subject matter and shooting style.